As Kyrgyzstan is surrounded by mountains, there are about 40 000 rivers in the country. These rivers are estimated to be 150,000 km in whole. Water dumping is 47 km3. Rivers are mainly created from the water melted from glaciers and ice. Also heavy rains in mountains make a contribution to the water level.

Some rivers in Kyrgyzstan are impossible to be seen as they are located at high altitudes. Anyway most of rivers and streams are great for rafting activities due to rapid waters. Long time ago rivers were the mean of transportation and something was transported along them. And very often guests travelling in Kyrgyzstan ask for more information about rivers and streams. All we can to tell is that mostly rivers are used for rafting and canoeing. The flow of the River Naryn may be seen along 535 km, the river is rather famous for antiquity. It is the creation of Big and Little rivers Naryn. It is located in Kyrgyzstan, mainly in the town Naryn. Great flows come from At Bashi and Kekemeren. Then Naryn River is flowing into the Toktogul Reservoir and Fergana valley, Syr Darya into the Aral Sea. 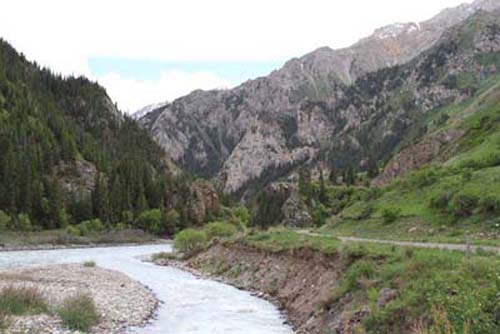 Nowadays there is a complication created by the cotton farming in Uzbekistan. The problem is in drying up as it is the main source of town. In the down of the river there is hydroelectric power generation and Toktogul Reservoir. The tour in Kyrgyzstan may go along the main Bishkek-Osh road. The other great river is Talas. The river is known for the fact that on the banks of it in 751 Chinese were defeated from the west. These defeat made the creation of silk and paper known to all globe.

The river Chui is located in the north in the Naryn region of Kyrgyzstan. Then going to the east of the Kyrgyz Range. To reach the river it is also necessary to pass the Boom gorge and Chui valley to disappear in deserts of Kazakhstan.

The river Sary Jaz is seen from the slopes of the massif Khan Tengri passing China. Long time ago it was suggested to build a road over the valley. Conditions of the river are suitable for professionals as it is necessary to have skills and knowledge along with experience.

In the west of Tien Shan there is a river Chatkal. Travelling in Kyrgyzstan you will notice it flows from distanced valley and flows into Uzbekistan. it adjoins ranges Chatkal and Chandalash of 120 km. long time ago, in the past it was rather easy to make a tour in Kyrgyzstan and raft down the river that goes to Uzbekistan. But for now it is impossible to make such a travel tour in Kyrgyzstan due to border visa regime conditions.