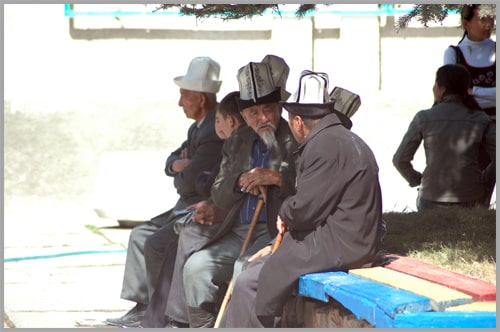 Language is the source of communication between people that connects different cultures and people. Language in Kyrgyzstan is from the family of Turkic languages, as the Runic Script was the first alphabet used of a type as Orhon-Yenisey script. But with the course of time people have been changing and the language was in the process of changing too. People then decided to adapt Arabic alphabet, as there was the simultaneous development of religion Islam. The powers of the Soviet Union influenced Kyrgyz and Arabic peoples, so that the Latin alphabet was taken by people in 1927 and then the Cyrillic alphabet, with new sounds added to the Russian language. And these sounds had never existed in the Russian.

Setting off for tours in Kyrgyzstan point out that the state language of the country is Kyrgyz - officials must know and fluently speak state language - divided into two main dialects, that represent northern, and Issyk Kul valleys, and the capital dialect alongside with southern for the people of Kyrgyz and Fergana valley. Uzbeks greatly influence the Fergana valley in the south of Kyrgyzstan. In society the language of intercultural communication is Russian. Being on a tour in Kyrgyzstan it is better to know details about languages in the country and if it is possible to know some phrases for citizens to understand you.

If you follow the link you can immerse in the abundance of offers of how to travel in Kyrgyzstan:
Jeti Oguz gorge
Son Kul lake
Sulaiman Mountain
Arslanbob
Uzgen complex
Manas complex
Lenin Peak
Hiking in Ala Archa gorge
Konorchek canyons
Horse riding in Chon Kemin gorge
Kyrgyzstan Language