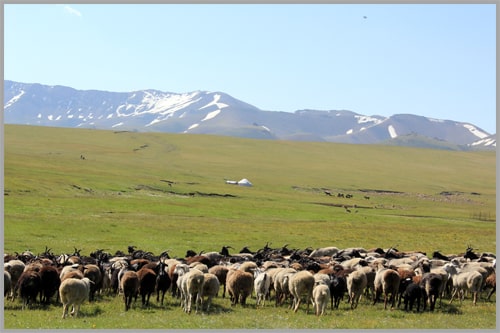 Mountain Kyrgyzstan is known for rich fauna life of the country. We may assure you, it is also very interesting as fauna. There are a lot of species in Kyrgyzstan some of which are dangerous. In accordance with altitudes fauna is located, there are specific altitudes for any animal species. At the height of 3,400 and 3,800 live marmots, mountain voles and field voles along with brown bears, hares, wild rams, and mountain goats. Marmots are not met with altitudes going higher. But other species are met and may be seen in the course of a tour in Kyrgyzstan, for example alpine choughs, red-bellied redstarts, rock pigeons, partridges, golden eagles, falcons, hawks, buzzards and bullfinches. Being in a tour in Kyrgyzstan, you may witness a lot of birds free and domesticated. As golden eagle for instance, the bird is domesticated from the baby time and lives along with a human for hunting purposes.

In Kyrgyzstan there are such animals that are considered to be rare and it is prohibited to hunt on them and kill them, capture them. Such fauna as Marco Polo sheep, red deer, lynx, and snow leopards is known in Kyrgyzstan. These animals are on the branch of total disappearance. Kyrgyzstan, its citizens are doing the best to save these animals, to save fauna of the country.