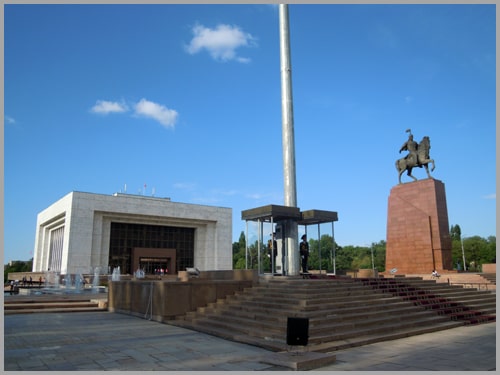 Kyrgyzstan is a country of the former Soviet Union and in the course of time the name of the capital was undergoing certain changes, as now it is Bishkek, first name was Pishpek due to the fort and the city relocated. And then it was named Frunze in honor of M.V. Frunze. The city is on the high of 700-900 meters above sea level, at the bottom of Tien Shan mountain range, located in they north of the Chui valley. As Kyrgyzstan is a mountain country you have great opportunities of choosing tours along the country. The territory of Kyrgyzstan is not so big, it is about 127 km2.

Previously, in the times of the Soviet Union, the city was named as "the greenish city". There are lots of buildings since the times of the Soviet Union in Kyrgyzstan, but new ones are emerging every day. Streets are getting wider, in the center of the city there is the square Ala Too that is in the list of sightseeing tour in the capital of Kyrgyzstan - Bishkek. Guests of the city first of all usually visit the sightseeing before continuing their travel along Kyrgyzstan. The places to visit in the capital of Kyrgyzstan are Government House, Opera and Ballet Theater, Russian Drama Theater, Kyrgyz Drama Theater, National Library, State Historical Museum, Museum of Fine Arts, Victory Monument, Oak Park that are rather picturesque and interesting.

One of the sites famous in whole Kyrgyzstan is the Osh Bazaar, the biggest in the Central Asia, now is in the process of reducing. Osh bazaar is located near the Western Bus Station, here all kinds of things may be bought: food, clothes, household goods, musical instruments, souvenirs. If you have any questions our company is glad to answer, please connect us on our website and get to know more information about tours in Kyrgyzstan.

Main information for being in the city: the International Airport Manas is in 45 km from the capital of Kyrgyzstan. To get from the airport or along the city from one point to the other you can take a taxi, booking here http://smstaxi.kg. The national  currency in Kyrgyzstan is KGS - som. That can be freely exchanged in every corner of the city, with currency exchange rate at the same level. But in the villages and bazaars of Kyrgyzstan the rate is not good in comparison with the city. To book rooms in a hotel just use the website https://bishkek-boutique-hotel.nochi.com. The national cuisine of the Kyrgyz people differs from other peoples; it is unique and exquisite http://navat.kg, http://arzu.kg. European cuisine is here https://restoran.kg/restaurant/172-vinoteka , coffee house http://coffeerelax.kg , for vegetarians http://barashek.kg. In case you don't want to take a taxi do sightsee the city, you may rent a car in our company, our managers will gladly help you.

In the city there are also night clubs located mainly near the Ala-Too square, on the Chui avenue and Orozbekov street: Bar 12, Zavod, Mansion, Zolden and Garage. And to feel safe you should take a taxi or a car with a driver, as streets are not lit at night and it may be dangerous in Kyrgyzstan. But taxi service is at low prices.

To investigate Kyrgyzstan means to make a tour in the capital and Kyrgyzstan itself and pay attention to such details as population, popular places as Osh Bazaar, Government House, Oak Park and so on, national currency, cuisine, restaurants and cafés. The main information you can acquire from our company and we wish you a pleasant trip in Kyrgyzstan and always glad to help you.