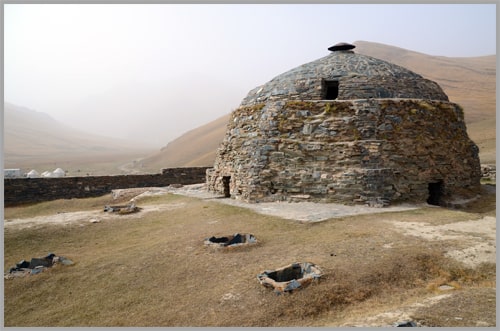 Day 1: Bishkek - Toktogul
Welcome to Kyrgyz Tour 1! Upon arrival, guide will meet and transfer you to the Bishkek city. The road to the city will take 40 min. You will have a guided city tour where you will see the major sights of the city like Pobeda Square (Victory Square), Duboviy Park (Oak Park), Central Ala-Too Square, the National Arts Museum, National Philharmonic, and many others places of interest. Later on you will be transferred to Toktogul the road to which will go via the southern part of Kyrgyzstan. In course of Kyrgyz Tour 1 you will witness the captivating mountains and gorges as well as breathtaking Tue Ashuu pass of more than 3 000 meter high. This road is known as one of the most wonderful in Kyrgyzstan. You will have many photo stops to remember this day. Night will be in a guesthouse.

Day 2: Toktogul - Osh
In course of the tour you will be transferred to Osh city. Your road will go via the picturesque mountain road. On the way to the Southern capital of Kyrgyzstan you will have a stop in Djalal Abad town to investigate the famous Uzgen Tower of 11th century. This prominent sight was built by Karakhanids. In addition you will see the mausoleums where the leaders were buried. The route of the tour will go among celestial mountains and breathtaking panoramic views. Upon arrival you will see the popular place for Muslim pilgrimage that is known as the Suleiman Mountain. You will visit this significant Suleiman Too (Solomon's Mountain) in the very heart of the city that as the legend tells biblical prophet Solomon (Suleiman in the Koran) was buried at the foot of it. This night you will spend in a hotel.

Day 3: Osh - Abshir Ata - Osh
Today you will have to travel to the picturesque place that is known as the Apshir Ata gorge. Upon arrival you will know that it has two interesting attractions as a sacred waterfall falling from a rock and incredible alpine lake. During the way to the lake you will witness the captivating beauty of the nature. There you will have time to investigate this sight. After it you will head back to Osh city. Night will be in a hotel.

Day 4: Osh - Kazarman
In course of the tour your next destination is Kazarman village. During the travel you will be surprised that 93% of Kyrgyzstan is mountainous. In the remote place it is possible to find. Moreover the picturesque beauty of the country will captivate you with mountains and unusual cultures. During the travel you will enjoy the view of breathtaking gorges. Nowadays you can still find nomadic way of life. Night will be in a home stay.

Day 5: Kazarman - Tash Rabat
Today you will explore the unique Stone Castle that is located in the solitude of Tian Shan Mountain on the altitude of 3200 m above sea level. This incredible sight from the 14th century is known as the Tash Rabat Caravanserai that lays on the branch of the Great Silk Road. Tours to this sight will show you the stone brick with walls 1 m thick that made 31 rooms in the mountain. In addition you will be impressed by the underground prison cells that were made to imprison thieves. The night will be spent in yurts near Tash Rabat Caravanserai.

Day 6: Tash Rabat - Kochkor - Bishkek
Today you will drive back to Bishkek city. The road will go through amazing gorge and mountain pass with elevation of 3 000 meters above sea level. On the way you will have a break at the Kochkor village where the local will meet and show you the method of creating national felt carpets. You will have an opportunity to do it by yourself. After it you will visit a minaret of the 11th century that was a mark for travelers for rest and shelter during the Great Silk Road. Near the Burana Tower you will see the Balbals or stone warriors that were made for brave warriors who died for Motherland. After witness the view of the top of the tower. Later on you will continue your drive to the Kyrgyz capital. Night is in a hotel.

Day 7: Bishkek - Airport
In the morning is transfer to airport.